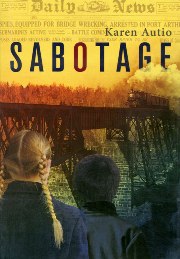 Interest Level: Grades 5 and Up

While their citizens fight on the battlefields overseas, residents of Port Arthur feel effects of the war at home, particularly the fear of the enemy.  Saara Maki discovers that simply having a Finnish name turns people against her and that her friendship with a German girl makes her a possible spy.   Newspaper reports inflame the community’s suspicion of immigrants with stories of sabotage and espionage.  Despite being only nine-and-two-thirds-old, newsboy John Maki’s passion for journalism fuels his desire to get at the facts behind the headlines, putting him in a precarious situation.